This mod is based off Monk Preston’s similar mod for Civ 5.

Make sure you only have one of the versions enabled in additional content when starting a new game:

OP (but not massively OP) Version 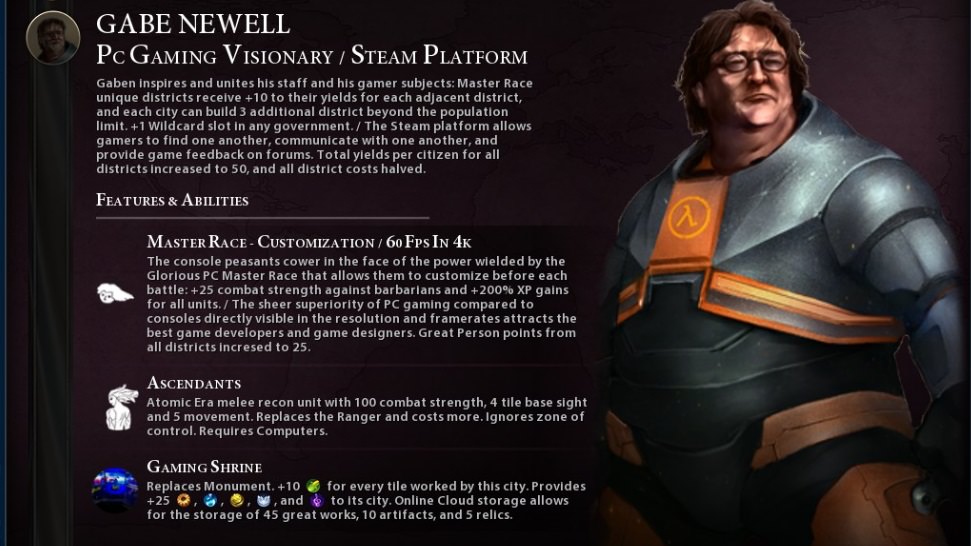 Features: – New Civ: PC Master Race, Japan’s music plays for this Civ (see discussion to change).
– New Leader: Gabe Newell
– Wikipedia information in the Civilopedia
– Beautiful art and icons partly taken from Monk Preston’s mod for Civ 5
– New unique districts, unit, and building for the PC Master Race
– New unique district projects, including some to create the Half Life 3 Game (a luxury resource)
– All the unique districts are removable (thanks to TC’s original mod)
– New dummy techs/civics at the end to avoid future tech/civic spamming (does not replace Future Tech/Civic).
– Promotion level cap from barbarian combat raised to 6 for all players.

Gabe Newell (Traits – PC Gaming Visionary / Steam Platform) : Gaben inspires and unites his staff and his gamer subjects: Master Race unique districts receive +10 to their respective yields for each adjacent district, and each city can build 3 additional districts beyond the population limit. +1 Wild card policy slot in any government (Please remember that you can place any card, not just the purple cards, in the wild card slots) from his cooperation with the PC gaming community. / The Steam platform allows gamers to find new games, find one another, communicate, and provide game feedback on forums. Total yields per citizen for all districts increased to 50, and all district costs halved.

PC Master Race (Traits – Customization / 60 FPS and 4K): The console peasants cower in the face of the power wielded by the Glorious PC Master Race that allows them to customize before each battle: +25 combat strength against barbarians and +200% XP gains for all units. / The sheer superiority of PC gaming compared to consoles directly visible in the resolution and framerates attracts the best game developers and game designers. Great person points from all districts increased to 25 (except for the Design Studio/Theater, which gives 10 gpp for artist, writer, and musician).

Unique Districts (no new models or buildings yet):

– Development Studio (replaces Industrial Zone): This is where all the interns and grunts do all the hard work of Development for Applications, Systems, Web, Embedded Systems, and Test Automation.

– Accounting Department (replaces Commercial Hub): This is where all the sales, marketing, and accounting occurs for the corporation.

– Research Facility (replaces Campus): This is where all the research and development for new game physics, game engines, and game concepts occurs. If you want to make a great game about portals, you have to test portal physics somewhere!

– Design Studio (replaces Theater Square): This is where artists and graphic designers create 2D and 3D artwork and models for games, and where the writers and musicians create stories and soundtracks.
Awards 25 envoys when completed.

– Convention Center (replaces Holy Site): This is where fans can come to interact, possibly cosplay, play new and current games on the best equipment, meet the developers and staff, and just get free stuff.

– Employee Lounge (replaces Entertainment District): This is where all the employees can go to relax, chat, and buy and eat food in this enormous space with tons of plants.
Provides 25 amenities from entertainment.

– Legal Department (replaces Encampment): This is where all the company lawyers can work to undermine, attack, and sue other companies. The company also needs to be defended from similar attacks as well.

– Office Complex (replaces Neighborhood): The company needs more office space to ensure the continued growth and dominance of the PC Master Race.
Provides +25 housing regardless of appeal, and available earlier with the Guilds Civic.

– Glorious Port (replaces Harbor): This allows the company to ship newly developed games all around the world.
The Glorious Port allows for many more cargo ships to be dealt with at once, providing +2 rather than +1 trade route capacity, regardless of whether or not the city has an Accounting Department. The Glorious Port also enables Deep Sea Mining, providing +10 production for all coast and ocean tiles worked by this city.

– Pumping System (replaces Aqueduct): New advanced technology allows pumping freshwater directly from very deep underground, allowing it to be built anywhere and then pumped to the city center. This supremely fresh water has been extremely well-filtered by the soil and is always cold. Only Gordan Freeman is capable of navigating this piping system.
Provides +30 Housing regardless of river/lake access. Requires Steam Power.

– Portal Network Node (replaces Aerodrome): A vast place for using portals to trade and send the new games all over the world. People can also use to portals to travel to other portal gates. The portals and their power sources must be kept underground for safety and defense. The open land above is used to build and store aircraft to defend the node and provide backup transportation.
Provides 10 amenities.

Unique District Projects (new icon for the Half Life 3 projects):

– There are projects to remove each of the unique districts, except for the Office Complex. Special thanks to TC’s Removable Districts mod for original script.

NEW UPDATE- Japan’s music should now play when you play as the PC Master Race. See the discussion on how to change the civ music.- Added a poorly done Japanese Translation for the mod using Google Translate.- All other languages besides English should now display the mod text (Mod text is still in English though, except for Japanese).- Japan’s music should now play when you are playing against Gabe and enter his leader screen.- Fixed Removable Districts Icons (If YOU are playing as the PC Master Race, I no longer recommend having the Removable Districts mod enabled).- Lowered increased cost over time for district removal projects (to match that of the Removable Districts mod).- Re-added Spaceport to list of districts able to be removed (the project will show up twice if you have Removable Districts enabled).

Hey just giving some possible insight into the -665 amenities bug. I was able to isolate mine down to the Hyperdimension Neptunia mod by blanec http://steamcommunity.com/sharedfiles/filedetails/?id=1206216678&searchtext=hyperdimension+neptunia that should be the right mod page. The only real reason I found this bug was that I was trying to play some modded civ with a friend and he’s an anime fan and not so much on my case so I downloaded this mod to play with. After hand disabling and enabling mods in tandem with this one I found the above to be the offender. If I had to hazard a guess maybe it has something to do with both being OP civs? Edit: used the search link by accident this should be the actual mod page.

[NEW UPDATE]New quality of life improvements:- New unique district projects for the Master Race which require much more production.- New Techs and Civics at the end that cost a ton.- Added district projects to remove the Master Race unique districts (icons and modified script taken from TC’s Removable Districts mod).Fixes/Updates:- Fixed air units so that they can be upgraded.- Created a portrait for the Ascendant unit.- Ascendants should no longer receive a penalty vs. anti-cavalry.New game mechanics:- Completing the Half Life 3 projects will reward you with 20 copies of Half Life 3 Collector’s Edition. Sell it to the AI!- The minimum xp from barbarians is increased to 3 exp and the level cap for barbarians is increased to 6.