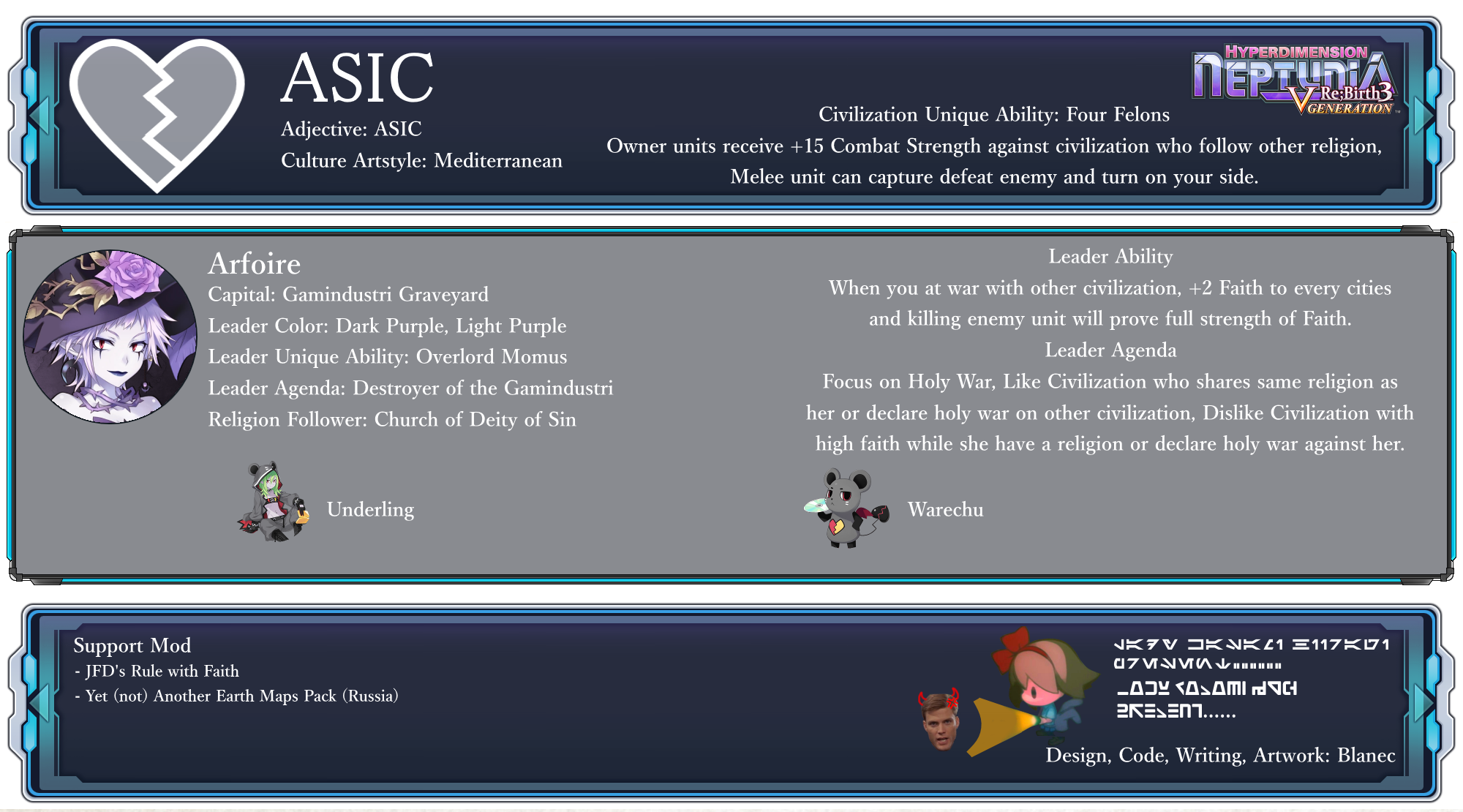 ASIC Unit: Warechu ASIC unique Ancient era recon unit that almost faster double time which faster than Ducken Explorer or even Scout Trooper of Lowee Empire and cheaper than Scout, but almost weak when attacking by enemy unit or barbarian and they can’t ignore terrain cost.

Arfoire Arfoire Trait: Overlord Momus Missionaries can attack other religion unt. When you at war with other civilization, +2 Faith to every cities and killing enemy unit will prove full strength of Faith.

** Bug ** – I can’t figure it out if the mod is upload work properly (if mod don’t work, report immediately)

A lot of people give this game flak based on the changes it makes. I think most things they’ve done has been a positive improvement from civ 5. The gameplay changes have all been brilliant, meanwhile I’m not impressed with the AI, although they are still fun to play against.

-Districts & tile improvement got a big overhaul. This is definitely the biggest and most important change in my opinion. I really like the new way city tiles are developed with builder’s having a limit on improvements and the use of districts. It’s a really brilliant change that makes city building more dynamic and engaging. The traders make building roads less hand-holdey and more reasonable as well. Cities now have housing which is a new way to limit population. Housing initially is set on the available water (rivers, coasts), but can be increased with things like granaries etc. Definitely an improvement.

-Combat movement is overhauled. Now if you want to climb a hill you can’t spend 1 movement point on an ending turn, you have to either have enough movement points, or be on the starting move tile. This completely changes how fights work out. This can be a little frustrating when you’re used to marching spearmen over hills, but overall I think it’s a more clear representation of spending movement points. It does however slow reinforcements and army mobility down, which can slow gameplay a little.

-The new civics tree and great person aquisition is also much better. The game is more dynamic with the 2 tech trees separating technology and government, and great people have an ergonomic section built in to see progress.

-Art style is all cartoony now. At first I hated this, since then it’s grown on me. Civ 5’s style is very nice, but once you start to get used to all the new designs the Civ 6 style I feel looks very polished and easy on the eyes.

-City states were overhauled, you use envoys that you earn from the civics tree and influence points to gain city state’s favour. I think this is a much better and more controlled mechanic than the money throwing method civ 5 implemented.

-Spies are now more like units than an extra feature, able to carry out a number of tasks such as sabotaging rocketry (preventing science victories), stealing techs as before, stealing gold/production etc. These spies are a lovely change to the straightforward civ5 spies and makes non-war civ interaction more interesting.

-A negative to mention is that the AI’s have seen little to no improvement from civ 5. They are needlessly aggressive, to the point where if you go to war with someone they also all hate they will happily drop all ties with you and scream Warmonger as loud as they can. The warmonger penalties are huge and unrealistic. All AI’s seem to hate every other AI and player and it’s a particularly boring and confusing way for them to act when it would clearly be in their better interests to turn a blind eye and trade for luxuries instead. There are a few workshop mods to help this but I think it needs more attention from the developers.

-Another setback is no cross-platform compatibility. I initially bought this to play with my friend and I can’t because pc and mac versions are different. Feasibly they’ll eventually be the same once the mac developement catches up so hopefully this will sort itself out.

-The performance is a little demanding for a turn based strategy game. Probably moreso than civ 5 so if you don’t have a war machine, watch out.

Overall I’d recommend it over civ 5. Although the AI are just about worse, the gameplay is much better and civ 5 AI are not exacty anything to praise.

RISE AND FALL DLC:
Rise and Fall causes a huge change to the pace of the game. The biggest change is the loyalty mechanic, causing cities founded too far away or too close to other civs to rebel unless you keep under control with governers. This was a lovely design choice and addresses why your own cities blindly follow orders. There are also dark and golden eras, relying on era points you gain by doing thigns such as buildings wonders or meeting people etc. This change adds a nice new dynamic to consider during gameplay, but I personally think the eras should not be so hard-set in what age you get, ie. a darker<dark<progressive<golden sorta thing. It also tweaks many wonders and policy types to balance the game. I’d recommend if it’s on a decent sale, but it’s a bit heavy on price without one.

After 500 hours I’m finally getting round to writing a review of this game and it’s expansion – Rise and Fall.

Civ VI flawed, in many ways fundamentally. It is a game that has so much potential, so many excellent ideas to expand on arguably the greatest turn-based strategy game of modern times in Civilisation V: Brave New World, but falls short in a few key areas

Graphically the game is stunning. The aesthetic issues some people seemed to dislike moving from V to VI are moved past easily once you see the fluid unit, leader and wonder animations. The day night cycle looks good, albeit a little unnecessary and annoying at times, and everything is clear on the strategic and world maps. The music is also excellent, each Civ having their own theme that develops as the game goes on, America’s theme being notably one of the best pieces I’ve heard in a video game for a long time. Rise and Fall simply added to these with more leaders and more units, all of which look and sound top notch

Gameplay wise there are a lot of positive improvements. Districts make city planning a lot more strategic and long term than in V, where you could broadly keep your city up to date by chopping and changing tile improvements as you went. The change to workers that means they now have limited uses fulfills a similar purpose. Wonders similarly use up space on the map, though their value is disputable in far too many cases. Policy cards make changes to the fundamental bonuses your Civ is receiving feel a lot more involved and a lot more intricate than just the government or policy tree changes of previous games. Combat is essentially unchanged from V, if you’re going for a domination victory the only major change is the addition of the Encampment district which is vital to any warmonger. Loyalty means that expansion is tempered by a need to either snowball completely or heavily garrison your gains however, which is a good addition.

But all those good improvements come with downsides. The early game is even more heavily weighted in importance than in V. Unlucky starts can cripple you in comparison to your opponents, wonders can sometimes skew things so far as to remove major challenges to expansion and teching entirely (The Colosseum adds both Loyalty and Culture to cities in range, making it an absolute monster), and religion, despite having a victory condition now, is less powerful than in V by virtue of its bonuses being a lot less passive and a lot more focussed on that victory. Spies are either useless or broken depending on circumstances (siphoning funds is meh but completely stopping a Space Race part or outright stealing works of art is insane) and often arbitrarily extend games. The AI has no real idea, seemingly, as to how to use most of these elements which further reinforces the players ability to abuse such mechanics. It says a lot that the developers made massive improvements to the AI’s ability to use naval combat a year after release because it was, frankly, so easy to win with fleets before that patch and still isn’t that hard to just steamroll them now.

All that being said, it has the same ‘one more turn’ addictive quality that it predecessor had, compounded by the city planning elements that make you want to go back and try again with a new setup and synergies. I adore playing Greece and trying to find ways to beat the AI’s to wonders around my Parthenons to create powerful districts that dominate culturally and have done since release. Balance is actually very good, though there are definitely currently Civ’s that are extremely powerful (Korea, Greece, Russia, Germany – essentially any with a specialised district of their own) and tech is still easily the most reliable route to victory because by its nature it provides two routes to easy victory (Space and Domination).

In multiplayer I’ve had issues with desyncing since release but it’s never been fatal, unlike in Beyond Earth and V where games would just collapse after some desyncs. Sometimes that’s unavoidable, so the relatively stability of the game on release and since is good.

Overall, Civ VI is not an improvement on V, but neither is it a huge step backwards. It won’t feel enough like a new experience if you’re still enjoying V and sometimes my nostalgia for BNW kicks in hard. But I don’t think I could go back to it. Civ VI changes how you view the Civilisation environment, and that alone means it’s gets my recommendation as something to try if it ever goes on sale.